I’ve entered numerous sportives over the last five years but the Brompton World Championship on Saturday was my first competitive bike race….

Brompton championships have taken place every year since 2006, previously being  held at Blenheim Palace and at Goodwood. The 2016 race, the 11th edition was held in London as part of the Prudential RideLondon weekend.

As with every year there is a strict dress code of a collared shirt, neck tie and jacket – absolutely no visible sportswear or lycra is permitted. As an Ordnance Survey GetOutside Champion entering a World Championship it seemed only right that I should have something OS related on me, but the no lycra rule meant I couldn’t wear my OS cycling jersey.  Sue, my partner, came to the rescue by making me a fabulous tie out of a Snowdon Splashmap with the summit at the centre of the tie. To add to the authenticity, I took the splashmap to the summit of Snowdon on my climb the weekend before.

The race itself was eight laps of St James Park, starting with a Le Mans style start in the middle of the Mall. Your Brompton must be fully folded and placed on the opposite side of the Mall in race number order. 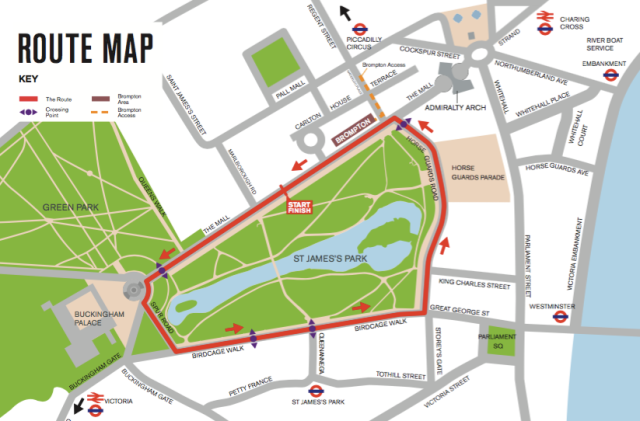 The race, of 550 riders, started in four waves. I was in the third wave, which started 20 seconds behind the fastest riders. Just before the the klaxon sounded for our wave everyone started slowly creeping across the Mall, then it sounded and everyone was off running to their Bromptons.

Once on the other side it was a mad scramble to unfold the Bromptons, the quicker you do it the more places you can make up. It wasn’t the fastest time I’ve unfolded my Brompton but I was away and racing just after those around me.

I went off fast on the first lap, in fact it turned out to be my fastest lap of the race at 3 minutes 38 seconds (not including the 1 min 10 seconds to unfold the bike and cross the start line), probably too fast but I made up a lot of places.

The following view is from my handlebars, whilst it’s the entire race I have speeded up the footage after the first lap, keep an eye out for the riders dressed as WW1 Army Soldiers saluting the Queen/Buckingham Palace

I was lapped after 4.5 miles of racing, although I have to say that the group that lapped me did include ex-professional riders including David Millar and Michael Hutchinson.  As a result of being lapped I crossed the finish line having completed 7 laps (9.55 miles) in a time of 29 minutes and 59 seconds, averaging 19mph.

That put me in 185th place in the mens race (322 finishers) and 209th overall (420 finishers) – My goal was to finish higher than my starting position of 366, so I was extremely happy with my time. Also there’s not many amateur cyclists that can say they have raced alongside David Millar (ok, participated in the same race as….)