Having ridden in the Brompton World Championships in 2016 and again at the weekend in the 2017 final, I had the opportunity this week to take a tour around Brompton’s factory in London.

The tour begins with an overview of the company’s history, starting in 1975 when Andrew Ritchie first had his idea for a folding bicycle and over the next seven years he built various prototypes.

By 1981 the design had improved and featured a bent main frame tube and main hinge assembly, fifty of these pre-production models were sold in order to raise capital after several appeals to banks and bike companies were turned down.  Most notably was this decision from Raleigh in 1982.

Little did they know then that they were rejecting a company that is now a classic icon for British design, engineering and manufacturing which can produce almost a thousand handmade bicycles a week.

Production halted in the mid-eighties until Julian Vereker, a Brompton enthusiast and friend of Andrew’s invested in the company.  Production restarted in 1986 and by 1987 the company moved to its first factory under a railway arch in Brentford. The new factory allowed full production of the mark 2 to start with the first bikes being delivered in 1988.

In 1993, due to an ever expanding business, production was moved from the railway arches to Bollo Lane a couple of miles away. Just five years later (1998) this new space was once again too small to meet the demands of production and the factory moved back to Brentford, which would be home to Brompton for the next 18 years.

Towards the end of 2016 the company moved to it’s new premises and on the 28th November 2016, HRH The Duke of Edinburgh officially opened the new factory in Greenford.

The majority of the building is taken up with the main production processes, but it also houses the entire Brompton business from administration, R&D, after sales support, parts, etc.  The tour covered the production processes and therefore the three main areas, pre-production, paint, and final assembly.

It seems rather fitting that every Brompton folding bike starts with the two hinge assemblies, the main tube and the handle bar support.

The hinge plates are brazed onto the tubes using a machine to ensure the strongest possible bond, every other join on the bike is brazed by hand. Brazing is the process of joining two or more pieces of metal together using another metal as a filler that has a lower melting point than the pieces being joined.  It differs from welding where the pieces being joined are melted in order to bond together.

Brompton bikes are made from steel, with brass as the filler.

The next, and probably the most important, step is to bend the main tube to form the iconic curved main frame tube, without it, it just wouldn’t be a Brompton.

Every single Brompton main tube since 1988 has been formed using this machine, in a process that takes just seconds.

The handle bar support tubes are also bent to a specific shape depending on the type of bars that will be fitted to the bike. With the tubes complete, the process of brazing the frames can start. Rather than have one person braze every joint on a single bike, the process is broken down into several steps, each focussing on a separate component. For example, Main Frame, Bottom Bracket, Head Tube, Rear Triangle etc.

The highly skilled braziers are trained on each component and rotate around the processes, generally doing two different components each day. There are hourly targets for each component, i.e. for the main frame assembly the brazier should be completing 15.3 frames a hour.

Once all the components have been brazed they are sent to the paint shop for powder coating.

The central part of the factory contains the parts department, they process all orders for spare parts from dealers, bike shops and consumers from around the world.

Individual components are also assembled in this area, these are put together based on the current demand.  Today they were assembling mudguards, brake callipers and reflectors.

Unfortunately we didn’t get to see the powder coating process in action, as they were in the middle of a colour change, this generally happens about 4 times a week.

Although the process had started, the frames and components go through a five step process from cleaning, the powder being hand sprayed on to finally being baked at 180 degrees celsius for 10 minutes.  The heating and cooling process is carefully controlled and monitored to ensure an even paint finish and that the metals do not deform.

With all the frames painted and sub-components put together the final assembly of the bike we all know and love can start. This is done on two identical assembly lines, each consisting of seventeen bays.

As you expect the assembly starts at bay one where the main frame and head tube hinge plates are joined together, bottom bracket inserted and the seat post clamp is fitted.

Next the seat post is fitted and the bike is mounted onto a trolley so that it can be easily moved between the bays. 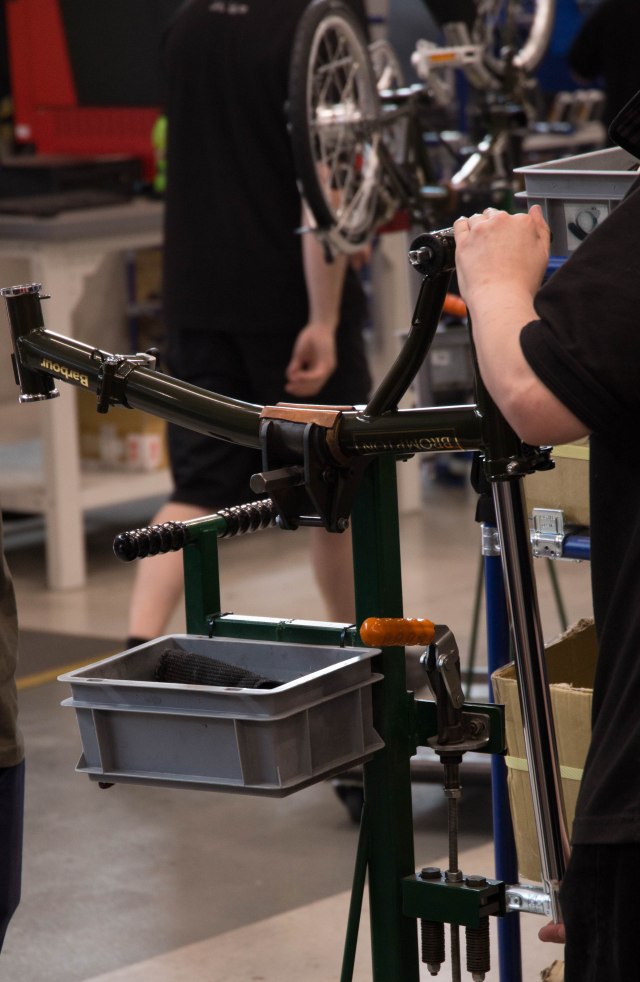 Every bike has a “Pink Slip” (originally printed on pink paper, changed to standard white to save costs, but the name’s stuck). This slip tells the worker what type of Brompton it is and what components need to be fitted to it.  It also contains all the information about the bike, serial number, order number, customer etc.

From here the bike is passed from bay to bay until at bay 17 the fully assembled bike is checked and packaged ready to be shipped to the customer.

Screens at each end of the production line show the current progress. At the time of the visit (11.17am) the screen shows that 58 bikes have been built today at a rate of 15 bikes an hour (target 14).  At full capacity both lines can build almost 1000 bikes a week.

The final step once packaged is to load the boxes onto pallets for distribution to the customers.  I wonder how many of the bikes (and their proud new owners) I saw being built today will race around St James’s Park in London this time next year in the Brompton World Championship Final 2018.

The first signs of spring..... ever hopeful.
My new post-exercise recovery drink! Fresh creamy milk straight from the local farm.
Winter
The Malvern Hills
Rowe and King Hyena’s 8up Team Time Trial on one lap of Watopia’s Waistband
Autumn