What did you do for the Bank Holiday weekend? I joined 49 other cyclists for the adventure of a lifetime by cycling from London to Paris in just 24 hours, just over five years to the day after my heart attack and raising funds for the Pumping Marvellous foundation. I had entered the London to Paris 24 hour sportive organised by Sophie Radcliffe and the team at Cycling Friendly.

The adventure began at the Royal Observatory in Greenwich Park. I had arrived an hour early, having cycled there from a local hotel that I had stayed at the night before. I wasn’t expecting the view from the start, as I reached a statue at the end of a tree lined avenue the view opened up to a one hundred and eighty degree panorama of the park and London beyond, topped off with the skyscrapers of Central London and Canary Wharf on the horizon – I’d only just arrived and the views were fantastic!

Other riders started to arrive and soon a small group had started to form around the benches opposite a van selling coffee. I was a little worried as I entered by myself and therefore would not know anyone, I needn’t have worried as everyone was extremely friendly. Introductions were being made along with the normal questions in this type of scenario, such as have you travelled far to get here etc?

The record distance travelled goes to Milton, he had flown into London the day before from Brisbane, Australia just for this ride and another rider had come from America. It was turning out to be a truly international event before a pedal had even been turned. With the introductions, registration and rider briefing complete it was time for the official group photo in front of the iconic Canary Wharf skyline before heading off on stage one and the ferry at Newhaven.

With the riders all assembled we set off for Paris, I started my Garmin at 3:29 pm (UK time) making the goal for the Eiffel Tower 4:29pm (French Time).

The busy streets of London were soon replaced with quiet country lanes as we made our way out of the capital towards Orpington, by chance the route passed my sister-in-law’s mother’s house and they had very kindly made a banner for me, encouraging me up the first main climb of the day.

After Westerham, the route climbed up onto the High Weald skirting Five Hundred Acre Wood, the scenery and views across East Sussex were stunning.

I had hired a small GPS tracker for the ride from Open Tracking, this was sending my current position to a website every ninety seconds and displaying it on a map of the route for family and friends to track my progress. For UK based events Open Tracking use the detailed 1:25000 Ordnance Survey mapping, however as my event left the UK I had to use an alternative mapping partner.

Pumping Marvellous, the heart charity I was cycling in aid of, had also tweeted the tracking link to it’s followers before the start and was tweeting updates along the way, each one was appearing as a notification on my bar mounted Garmin. This was providing me with an excellent source of encouragement, knowing that others were following and supporting me along the way. 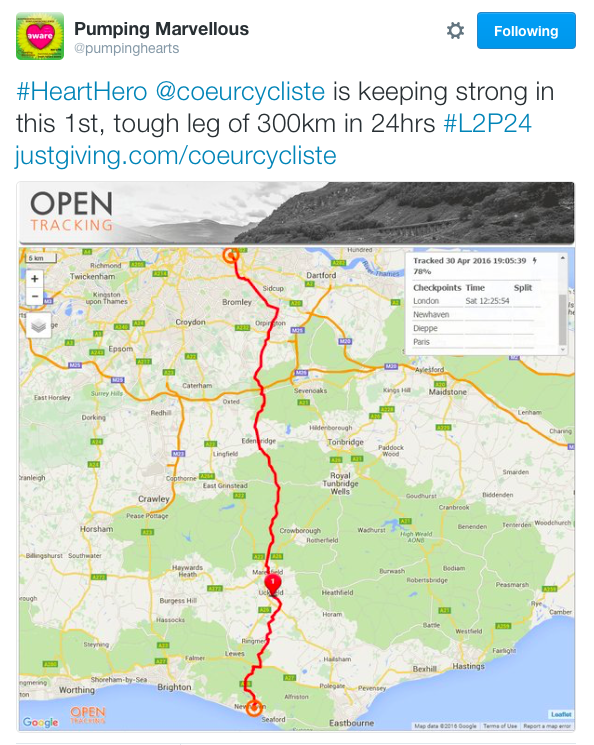 By this stage I had been cycling with a group of seven other similar paced riders and we were making steady progress towards our final stop of the evening. The sun was getting low in the sky, as it dipped behind the clouds and the horizon to leave us for the night we were rewarded with a fantastic sunset, unfortunately the photo below does not do it justice.

We arrived in Newhaven at 8:11pm, having covered the 58 miles at an average speed of 13.5 mph with 3,570 feet of climbing, to be rewarded with a two course meal and the opportunity for drinks in a local hotel before riding to the ferry at 9:30pm. Whilst waiting to board the ferry I got talking to a couple of French cyclists who were on their return leg having cycled from Paris to London, on mountain bikes and mainly off road by the sounds of it – Chapeau!

Continued on the side of the channel in the next post